There was a real buzz at Oban Harbour on Saturday 13th May, the first cruise for our new vessel

During the few days prior to departure, the weather forecast, along with the wind speeds and direction was giving some thought as to the best itinerary; but both guests and crew were anticipating with great excitement the prospect of the first week of cruising. The Crew of four were; James the Skipper, Maddy the Bosun, Peter the Chef and myself, Nigel the Guide, hoping to bring my wildlife, photographic, and Hebrides knowledge for the enjoyment of the guests.

Saturday: After everyone’s luggage had been loaded and the briefings were completed, it was time to enjoy canapés and a glass of fizz followed by the famous scones made by Granny Mary. 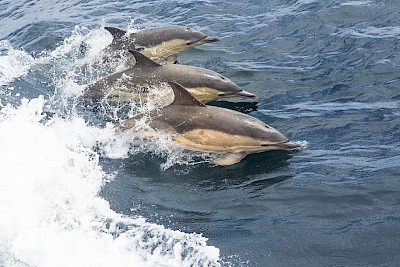 Very soon everyone was getting to know each other, relaxing, and discussing the prospects for the week ahead.  We crossed the Firth of Lorn, cruising north in the Sound of Mull and as the afternoon progressed we turned right into Loch na Droma Buidhe, at the mouth of Loch Sunart.  This is a lovely, quiet, peaceful anchorage for the night, and everyone was ready for the freshly prepared feast that Peter had prepared. Duck spring rolls were followed by salmon and teriyaki noodles, egg custard, a Scottish cheeseboard, and freshly brewed coffee.

Sunday: After consulting the weather forecast, Skipper James decided on a leisurely day around Ardnamurchan Point, aiming for the very picturesque and rarely visited beach of Loch Crean Tragh. 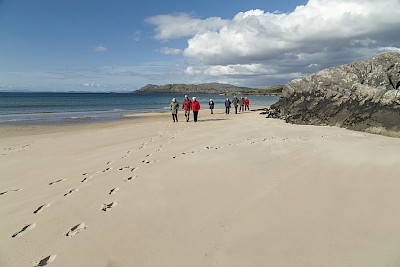 We popped across to Tobermory on the way, cruising along the north-west shore of Mull before venturing out into the ocean. Black and common guillemots were keeping us entertained along with gannets and other sea birds, in particular large flocks of Manx shearwaters, which we were to see on each of the following days.  We were given increasingly good views of all of the "Small Isles" including the Isle of Muck which we anchored close to for lunch before rounding the point of Ardnamurchan and anchoring in the sheltered loch. I proposed a shore visit to the inviting white sands which are such a familiar feature across the Hebrides, so our guests enjoyed a beach landing and stroll before returning to the boat for drinks and a delicious traditional Sunday dinner. The evening ended with a glorious sunset, which had everyone out on deck with their cameras.  This was to be the first of many spectacular sunsets, causing the rear deck to be renamed “the sunset lounge” 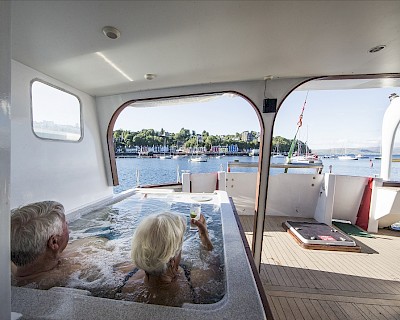 Monday:  After breakfast our vessel reached the Sound of Sleat, off the Isle of Skye. Given the wind direction, the Skipper proposed a visit to Loch Nevis, which would provide great views of Knoydart.  We went ashore at Tarbet for a walk south to Loch Morar where large numbers of the carnivorous butterwort plant were observed. A snack of Chef Peter’s spectacular brownies kept us sustained until back on board, where several guests enjoyed the delights of the hot tub.

Tuesday: With both the sea and the wind fairly calm, we travelled back along Loch Nevis and into the Sound of Sleat where we continued past Glenelg, before turning west into Loch Alsh, passing under the famous Skye Bridge. We continued along the eastern coast of Skye and anchored close to Portree where we went ashore in search of ice creams and souvenirs.  After returning to the boat we enjoyed more good food and a voyage to our next anchorage between Oronsay and Skye. 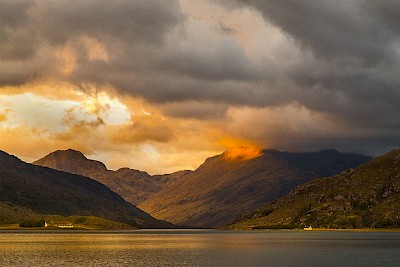 Wednesday: Our destination was the Isle of Canna, which is one of the most beautiful of the Small Isles. I have visited this small island several times so I was looking forward to going ashore with the guests, anticipating a lovely walk.  Some guests decided to visit the shop and the café and have a very leisurely stroll, while I led the rest of the group across the island and the connecting bridge onto the small island of Sanday in search of Puffins and the coastal sea cliffs.  The weather was warm, the sky was blue and it was fairly easy walking round the coast to the old church on Sanday.  We then turned inland and crossed the island to the sea cliffs and the small puffin colony.  When we arrived the views were spectacular; the high cliffs and the views across the short distance to Rum were well worth the walk. The guests enjoyed a snack of Peter’s Victoria sponge, while I went in search of puffins which were mostly on the water, fishing and swimming in small groups. 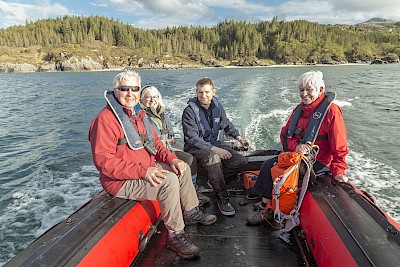 Once everyone saw the puffins, we left for the walk back where we were met by James and the tender which transferred us back to our vessel for another relaxing evening.

Thursday: The time had come to make our way back towards Oban and our plan was to cross to Tobermory for a late afternoon ashore.  On the way, we would visit favourite locations for both views and wildlife, hopefully to add to our sightings along the way.  This was clearly a good plan, because as we passed by the Isle of Coll, heading towards Mull we were joined by one of the great wildlife sightings of the Hebrides -  a large pod of dolphins.  Luck really was on our side as the pod stayed with us for over 45 minutes and consisted of more than 100 common dolphins, including many young. 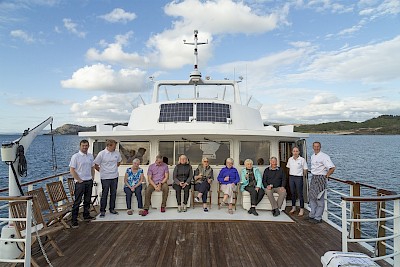 They gave a great bow-riding display in clear waters which was a very welcome and enjoyable highlight for everyone on-board.

After the dolphins left us, we continued to Bloody Bay just north of Tobermory where we had a lovely lunch of venison pappardelle while sitting on the deck enjoying the views.  We saw two distant white-tailed eagles before continuing into Tobermory where we went ashore to see the famous coloured buildings on the seafront and a visit to the distillery and the aquarium.  Back on board, several guests enjoyed the hot tub while Peter cooked up treat for our last dinner with scallops for starter followed by sea bass with another great sunset to round off our last night.  It would be fair to say that everyone was having a great time and no one wanted to go on to Oban and home. 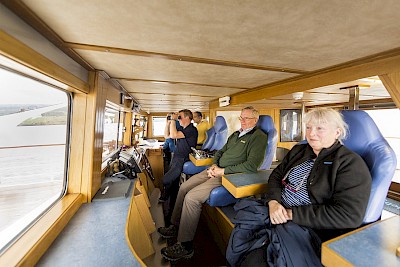 This was further added by the guests performing a song they had written and with lots of enjoyment and laughter we all reflected on a great cruise, indeed a great start of the season.  A brief trip back out on deck to review the sunset photo opportunities was met with the sound of a tawny owl calling from the nearby Aros Park woodlands, a very peaceful end to the day.

Friday: It was a fairly early breakfast as we still had a few more things to enjoy before reaching Oban; in particular we were joined by Judy Fairbairns for breakfast.  Judy is the mother of James our Skipper and is the author of the well-known book “Island Wife – Living on the edge of the wild”.  After some book signing and photos, we enjoyed a super-huge breakfast before cruising back to Oban where it was time to say our goodbyes.

Emma was always available or quick to respond to emails or messages left.  A well planned, perfectly executed trip with varied excursions for all abilities.  A great crew from all aspects.  Efficient, professional but also friendly at all times.  Couldn't have been better - go for it!