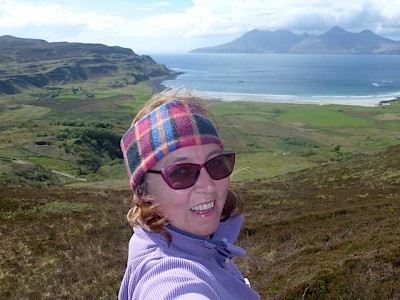 Elizabeth G feels like our home from home - this year is my tenth year holidaying on the boat.  Well we don’t see it as a holiday - more of a yearly adventure!

Rob the skipper and the rest of the crew greeted us in Oban;  we were determined to make the best of things after a forecast warning of high winds, however we left Oban under leaden skies and cruised to Loch Sunart where we spent the first night at anchor.

The next morning we steamed round Ardnamurchan point up to Eigg.  What a beautiful sail it was passing right round the Isle of Eigg, the distinctive Sgurr of Eigg transforming in shape before our eyes.  We passed close under the cliffs of the east coast of Eigg - a wild place - where the geologist Hugh Miller once described being served milk by a young girl in a croft.  He complained that she was too suntanned to be pretty.  Now that coast is deserted and left to the bluebells. 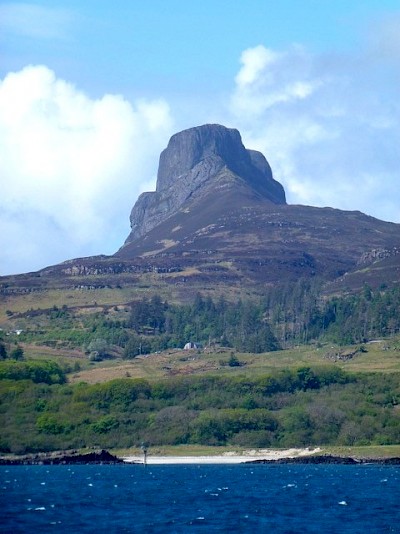 We came round into Laig Bay on the west of Eigg.

Now this was a treat.  The ferry goes into the east side of Eigg and it is a hike of several miles to get across to this spectacular coast so we were all looking forward to making a landing on the Cleadale side.  Rob reckoned a beach landing was out as we watched the swell crashing on the shore.  While we enjoyed our lunch on board, Rob did a recce with the rib and returned announcing he had found a place to land us on the rocks.

Ashore, we investigated strange Pictish graves - plenty for the archaeologists amongst us to argue over.  Some discovered the tea shop, others explored the coast round to the famous singing sands and 3 of us enjoyed the most spectacular walk above the cliffs to the Finger of God.  When you see it there is no question how it got its name.  This walk must be one of the best in the entire Hebrides.  From the ridge there are 360 views to Rum, Skye, Mallaig and the mainland hills, Ardnamruchan and of course across to the Sgurr of Eigg itself.  The township of Cleadale is spread out below you.  Fabulous.

In the evening we were treated to a spectacular sunset over Rum.

The next day was still blowing hard and we had a fun trip corkskrewing over to the shelter of Loch Scresort on Rum. 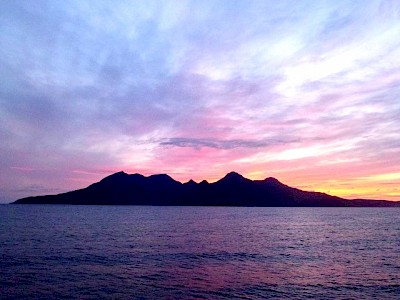 The prospect of a long day on Rum offered the chance to fulfil one of my ambitions - to get to the bizarre Greek style temple on the west side of the island where the island’s owner, George Bullough, is buried with his father and daughter.  It has to be one of the most bizarre sites anywhere.  To get there involved a long 13 mile tramp but it was worth the blisters.  Others explored closer to the boat and took the chance to have a guided tour of Bullough’s eccentric creation, Kinloch Castle.

Day 4 was still windy so we decided on another short sail and headed over to Canna - one of the most sheltered harbours on the West Coast.  Again we had the chance of a long time ashore.  Three of us were keen to attempt getting to the “nunnery”,  an archaeological site at the foot of Canna’s western cliffs - a 4 mile walk away.  And what an amazing walk it was.  The site can safely be viewed from the cliff tops but we fearlessly decided to negotiate a dodgy sheep path above a large drop and get to the remains themselves. 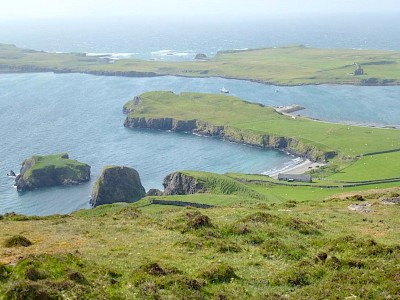 This is why I consider these holidays more of an expedition or an adventure.  But there is always plenty to do without risking life and limb.  Others walked to the stunning sea stacks of Sanday (the island connected to Canna by a bridge).

The following morning, Rob greeted us at breakfast to say that the wind was still too strong to really attempt heading south so it might be better to spend the morning ashore on Canna.  We were delighted. Everyone still had things they wanted to do on Canna.  The Prison (a crumbly castle on the headland), the souterrains, the summit of the island and, the beaches and primroses of Sanday and the carved Celtic cross.  Those doing less hard walking were the ones to spot corncrake, an eagle and a peregrine falcon.   And hot chocolates were enjoyed in the Canna Cafe. 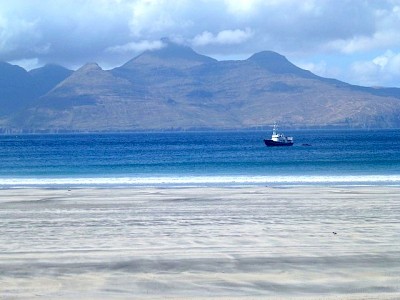 After lunch we decided to venture from the shelter of Canna.  The sun still shining, we were heading west of Rum in open sea when we really began to bounce over a few waves -  Elizabeth G took it in her stride! Suddenly we were joined by a pod of bow-riding dolphins as we decided to change plan and head down the sheltered side of Rum and Eigg and shelter in Muck for the evening.

Over dinner we discussed options.  Rob knew we were keen to get to the Treshnish Isles, west of Mull and still a long way south.  He had a plan.  We would head off early the next morning - at 7.30 and have breakfast on the move.  We could be at Lunga by 10 even though it meant an early start for Rob and the crew.

Day 6.  This was one of those idyllic days that you dream of in the Hebrides.  Blue sea, blue sky, and wonderful islands to explore. 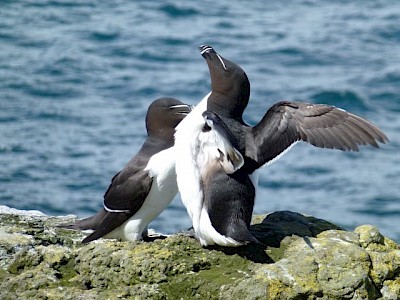 Lunga is like being in an episode of a David Attenborough programme.  Puffins at your feet, paths through drifts of bluebells, nesting shags objecting to your intrusion- impossible to avoid when their nests are right next to the path. We sat opposite harp rock - a stage for the thousands of guillemots to perform on.  Razorbills posed for pictures on the cliff edge and we were all just quite overcome by the experience of being in such a place on a perfect day.

Yet more was to come.  After lunch we headed south to Staffa.  For most of us on the boat this was a repeat visit but two of us had never been before.  To be honest, it doesn’t matter how often you have been to Staffa, you still can’t quite believe that it actually exists.  The rock formations are stunning.  Not just Fingal’s Cave but the whole south coast of the island.  We had long enough to explore the cliff tops (and another puffin colony) though those that ventured further had to fend off attack by nesting bonxies (arctic skuas).

Eventually we had to tear ourselves away and then had a sunny sail back into Loch Sunart - to a different anchorage on the Ardamurchan side.

Day 7 - we always hate the last day.  Knowing that we will soon have to leave the boat.  We arrived back in Oban with suntans, feeling refreshed and exhilarated and already planning our adventures for next year.

What a holiday!  The west coast clearly has its own micro climate.  We were blessed with blue skies and sunshine with only one day of showers.

Cruise the seabird cities of the Hebrides

What we do in the winter

We really enjoyed our cruise and were made to feel very welcome on board by a very friendly and knowledgeable crew. The scenery was fantastic, and we enjoyed exploring the islands on foot with our great wildlife guide Lynsey. The anchorages and route were carefully planned by Rob the skipper to take account of the weather and wildlife reports. We were fortunate to see large numbers of dolphins, a few Minke whales, seals and white-tailed eagles, together with countless seabirds. The food was plentiful and absolutely delicious, prepared by Tony, the chef - it was just as well we went walking every day! Craig the bosun was extremely helpful and nothing was too much trouble for any of the crew. There was a good library of books on board. I would certainly recommend Hebrides cruises to anyone who is interested in wildlife, walking, and good food!