The MacNeils of Barra

Home / News / The MacNeils of Barra

The MacNeils of Barra – descendants of Irish Royalty or raiding Vikings? 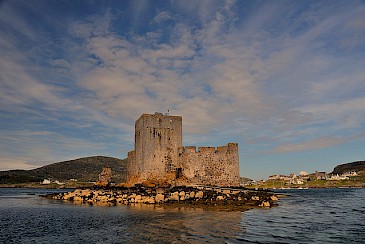 One of the delights of our cruises is mingling with the local population when we happen to meet them. The history of the people who populate the islands we visit is invariably fascinating and they are justly proud of their roots and ancestry.  Barra has a population of 1,000 and the main name is MacNeil.  There are of course MacNeils all over the world who are also proud of their heritage

For centuries the MacNeil clan of Barra have proudly claimed to be descendants of Ireland's "greatest" King, Niall of the Nine Hostages who emigrated to Scotland in the 11th century.

But a check on hundreds of modern day MacNeils has revealed their roots actually lie with the Vikings and not the Irish. DNA swabs taken from Barra MacNeils as far away as Canada and Australia have proved that the blood of fierce Norse raiders runs through their veins. The finding comes from the MacNeil Surname Y-DNA project run by genealogists Vincent MacNeil and Alex Buchanan.

Clansmen from all over the world including Scotland, the US, Canada, New Zealand and Australia have provided DNA samples but the DNA project has not found a single match to the O’Neills of Ireland.

Genealogist Vincent MacNeil, from Nova Scotia, Canada says the findings suggest the Barra MacNeils are probably of Norse descent.  The clan was infamous throughout Scotland and beyond for its Viking-style pirating and great seamanship. MacNeils raided the seas from their base at Kisimul Castle in Birlinn vessels - boats similar to the Viking longships.

Why not find out for yourself on our Far Flung Islands  cruise when we call in at Kisimul Castle in Castlebay seat of the Chiefs of Clan Macneil?

I found the staff on the phone (Emma who I dealt with) most helpful and reassuring.  The crew were so helpful and friendly, it was a pleasure right from the start.  All of the crew were knowledgable as well as the guide, Will - the all contibuted to a marvellos trip.  Do it!!

Jackie Thompson: 5 July 2021
St Kilda and the isles of the Outer Hebrides