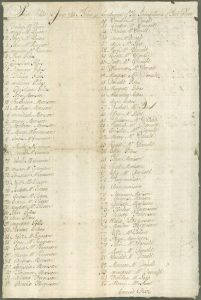 An amazing find - a 250-year-old census showing the earliest recorded population of the Island of St Kilda has been discovered thanks to work by the National Records of Scotland.

If you are a Maclachlan, MacQueen, Ferguson, Gillies, MacDonald or MacKinnon, the list of people on the census might have been your ancestors. We still have some space on our St Kilda cruise aboard  Proud Seahorse on September 4th 2017  if this trip is on your bucket list and you fancy a bit of luxury on the journey!

The document was discovered among the papers of the Maclachlan of Maclachlan family during cataloguing by the National Register of Archives for Scotland (NRAS), the branch of the National Records of Scotland which records historical papers held in private hands in Scotland. It is not known exactly why the census was taken, or by whom, but it is likely it was made to contribute to a wider report on the Hebrides.

Until now, the oldest known record of the population dated from 1822. As the later document included ages, it is possible to track five residents of St Kilda who appeared on both censuses, 52 years apart. The 1764 census also includes the ancestors of the final five families to be evacuated from the island in 1930, the MacQueens, Fergusons, Gillies, MacDonalds and MacKinnons.

Dr Alison Rosie, Registrar of the National Register of Archives for Scotland, said that this document sheds new light on the history of St Kilda and the families who lived there, and gives an insight into their lives more than 250 years ago. Through it individuals can be traced back fifty years earlier than the next surviving census, and many of the people listed were the ancestors of the families who left the island in 1930.

The document was found as part of  a hoard of papers - around 13 large boxes. The first document that was pulled out dated from 1590 and it was realised that the time had come to call in the professionals.  The team from NRAS had the papers spread out all over the dining room of Castle Lachlan – which is not a small room – and went through them, gasping a bit, before explaining that they would need more than an afternoon to evaluate them, boxing them back up and taking them away. A year and  half’s study produced a 79 page catalogue .

We’re just back from a superb 10-night cruise aboard Elizabeth G. It’s our latest trip with Rob and his crew. With en-suite cabins now it’s even more of a luxury trip. Not that we spent much time in the cabin - instead we were generally found on the top observation deck, watching shearwaters dance across the waves, fulmars shoot past effortlessly, gannets flying in squadron-formation and panicky puffins duck beneath our wake. We’re enticed down for two reasons: bow-riding dolphins, when we hang over the bow sharing the excitement and energy of this spectacle with our fellow guests, and food: Mags was our cook preparing fabulous meals with local ingredients, including scallops hand-dived by our skipper, Rob. It was at dinner each evening that Rob would discuss the next day’s itinerary, balancing our wishes with the weather and his incredible knowledge of the most picturesque anchorages. Each day saw us exploring a new island with the help of Nigel our wildlife guide, taken ashore by Rob and Bosun Craig in the tender. And we even got to St Kilda. St Kilda is a unique place with a magical atmosphere; an atmosphere that lingers in part because of its remoteness. Rob found the weather window to allow a 2-night stay and it was here, on our trip round the stacs, that guests and crew came together on the front deck to gaze in awe at the thousands of seabirds around us. As we disembarked, a little sadly, in Oban on our last day I couldn’t help wonder how soon we’ll get the urge to return...

Catrin Lester: 24 June 2019
St Kilda and the isles of the Outer Hebrides