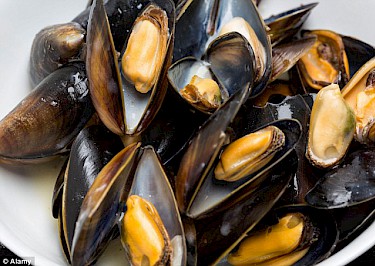 Scottish rope grown mussels produced by Inverlussa Shellfish based in Loch Spelve on the Isle of Mull will take a starring role on BBC TV’s James Martins “Home Comforts” programme later this week.  When we anchor in Loch Spelve, on our Magical Mull cruises, a major highlight is to buy fresh mussels from our friends, the Wilsons, to serve up at dinner onboard.

A TV crew from the programme visited Inverlussa last summer and saw at first-hand how the mussels are grown and cultivated.  Shown around the farm on Loch Spelve by Inverlussa director Douglas Wilson and manager Cameron Maclean, the environmentally friendly manner of the cultivation of Scottish mussels was explained and their excellent taste and nutritional properties highlighted.

The mussels are grown on ropes suspended from buoys in the sea and feed naturally off plankton in the rich tidal flows to ensure the growth of succulent and sweet tasting shellfish. Inverlussa is a member of the Scottish Shellfish Marketing Group, a co-operative of mussel and oyster farmers based on the Scottish west coast and Shetland.

Following the tour, the Inverlussa team served a tasty meal of sweet and sour mussels cooked up by nine-year-old Charlie Knight, the grandson of Douglas Wilson.

Douglas said: “It was great to welcome the Home Comforts team to Inverlussa and for us to be able to show how we grow our quality mussels. They really are the most superb tasting shellfish and their popularity with consumers is growing all the time.”

Nicola Kingscote, Series Producer, said: “We were thrilled to film on the Isle of Mull with a local firm catching such wonderful mussels.  We were also treated to a special cook up outside by the loch, with a tasty mussel recipe courtesy of nine year old Charlie Knight. Some of the most beautiful shots and flavours of the series were captured on Loch Spelve in the company of Cameron and Douglas and their families.”

The programme James Martin: Home Comforts, under the theme “Friday Night Suppers”, will be aired on BBC1 at 15.45 on Friday 23 January.  It will then be available on BBC Iplayer.

Me and Jonathan, had the most amazing time, on our cruise, on Emma Jane. Everything was perfect, from the ship, to the staff, to the weather, the food that Pete served, was the best we had ever eaten. Pauline worked so hard, to make everything perfect for us. Lynsey gave us all the wildlife, we could have ever hoped for, and brilliant walks. And James made the experience possible, with his expert knowledge, of where to go for the best of everything, (Including mackerel). On top of all that 9 strangers shared some amazing experiences together, and I think that all of us took more away from the cruise, than we could have ever imagined. And I know we’ll all stay in touch. It was so lovely to meet you too, and james’ mum, and daughter. What else could I say but, thanks so much. We had the best experience of our lives, and look forward to planning our next trip.