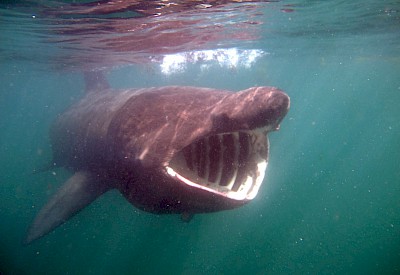 Basking sharks have been spotted off the island of Coll over the Easter weekend, much earlier in the year than expected.  We’ll be looking out for them on our Magical Mull cruise on April 25th (two spaces still available at a special offer of only £1150.00 pp due to cancellation)

It is thought the high pressure in the weather over the Easter weekend prompted early zooplankton bloom, which attracted the basking sharks to the waters around Coll, according to Basking Shark Scotland. One possible reason for the early arrival and plankton bloom could be in conjunction with the frequent high wind and storms this winter which could have unlocked natural upwelling and nutrients availability in the Atlantic, which in turn has provided the perfect conditions for generating shark food.

Around ten individuals were counted during a Basking Shark Scotland research trip on Easter Monday, among the earliest sightings that have been recorded in these waters and the wider UK.

Basking sharks normally appear in the Hebrides  from May onwards.  Areas such as Cornwall usually have amongst the first sightings although the number of sightings has been very poor over the last few years. The early arrival and large numbers of individuals present over the Easter weekend  are amongst the first in the UK in 2015 and confirms that the Hebrides are still the best in the world for basking shark sightings.

We really enjoyed the expedition to St Kilda and the day around the village especially as the weather was superb. Rob, Sarah, Vivi and Martin looked after us very well and the company of our fellow passengers was great.

William Partridge: 21 May 2016
St Kilda and the isles of the Outer Hebrides