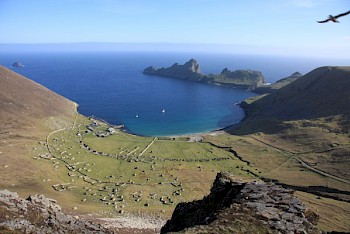 THE diaries of a teacher and minister’s wife who lived on St Kilda before the isles were evacuated are to be put online by the National Trust of Scotland.  Alice MacLachlan lived there while her husband, Peter, was the minister. The diary extracts coincide with the 85th anniversary of the evacuation and reveal an extraordinary insight into day-to-day St Kildan life, mentioning a number of the then residents of the island.

The largest island in the archipelago, Hirta, was occupied until 1930 when the last remaining islanders left after they asked to be evacuated because their way of life was no longer sustainable.

The diaries were presented to the National Trust for Scotland, which manages St Kilda, by the executor of Susan MacLachlan, Peter and Alice’s only daughter and are held in the archives of their head office in Edinburgh.

Peter was minister on the islands between August 1906 and May 1909 and the three volumes of diaries cover this period, and also the six months prior to this whilst they were in their first position of minister and minister’s wife in the village of Garve, twenty miles north of Inverness.

The aim is to present extracts of the original diaries along with transcripts for the period between January and June 2015 mirroring the time in 1906 when Alice and Peter were in Garve. From August 2015 onwards, the extracts will come from the MacLachlans’ time on St Kilda, reflecting the period from August 1906 until May 1909.

Alice MacLachlan – nee Scroggie – was born in 1872 in Haddington, East Lothian, the fourth child of six to John Mackie Scroggie and his wife Mary. They lived at Vetch Park, Haddington, although Alice was educated in Lincolnshire before later going into teaching in York. She married the Reverend Peter MacLachlan at the age of 25 on the 14th June 1899.

Peter was born in September 1857 in Tobermory and became a Church of Scotland Minister.

Their first joint position was in the village of Garve to the north of Inverness. In January 1906, where the first volume of diaries begins, Peter and Alice received a letter informing them that manse was to be handed over to the Free Church of Scotland and that they were to be transferred to St Kilda.

Initially, they had their misgivings about this new posting but soon settled into Kildan life as Alice’s diaries show. Whilst on St Kilda, Peter took the morning classes from 10am, and Alice taught in the afternoon until 4pm – also trying to teach the girls to sew. There were 22 children who attended the school, whereas previously it only opened when they were not required to help in the fields. After returning to the mainland in 1909 they moved to Glenelg near Kyle opposite Skye for about three years. They later moved to Acharacle on Loch Shiel. Alice died of a cerebral haemorrhage at the age of 48 on 12 March 1920, at Acharacle, Argyll.

We will keep you posted about the online link to the diaries when it becomes available  in August 2015 and also understand extracts are to be available shortly.

It WAS extra special for us - thank you for helping to celebrate our anniversary with a lovely cake in the sunshine on decks. A very memorable occasion.  Chef Jordan consistently provided first class quality food for all meals and there was plenty of it! It was good to hear from him about the dishes as they were served.  The boat was very clean and felt comfortable and cared for.  It was great to share evening meals with James and Will too.  Cabin, saloon and deck areas were all excellent.  The scenery was stunning and beautiful and it was good to have a daily briefing about plans for the next day.  Go for it!