We landed on a white shell sand beach on a tiny uninhabited island - the rocky headlands were carpeted with bluebells, sea pinks and primroses. Getting to these special places is what makes a holiday with Hebrides Cruises unique. 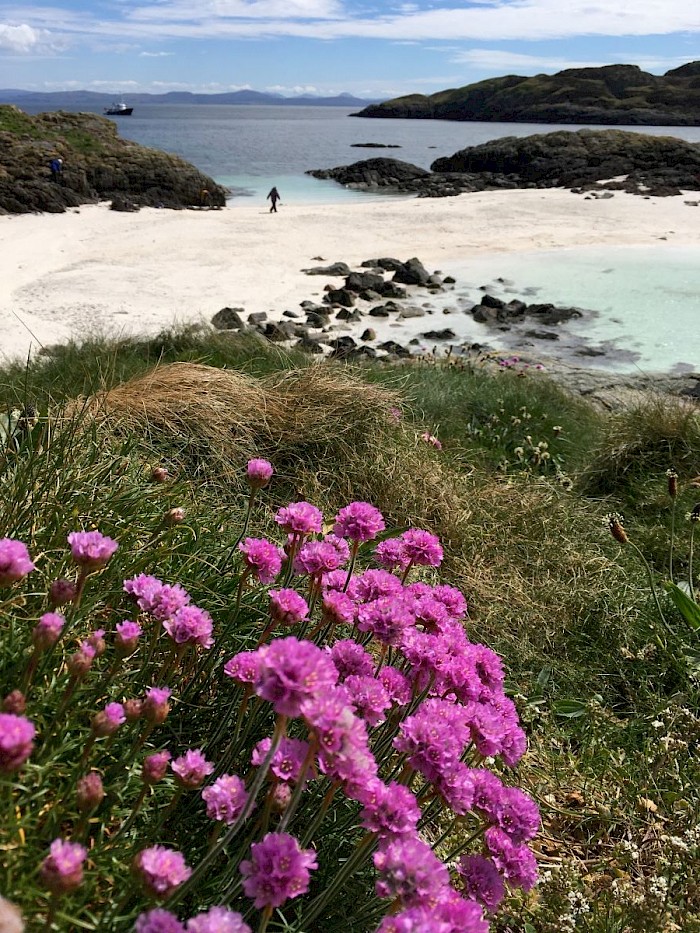 This was Eag na Maoile - an island off an island off an island. It’s part of the Cairns of Coll group which was bought by the writer, Alexander McCall Smith, for £300,000 back in 2014. Fortunately the Scottish right to roam means that even though islands are privately owned, you are free to land anywhere - though McCall Smith has promised to gift the islands to the nation on his death.

Our week gave us plenty of opportunities to speculate on what it would be like to own an island. Three of our destinations were islands with just one house. But what contrasting places. Firstly, Gunna is a paradise of wide sandy beaches. Caught in the narrow channel between Tiree and Coll, I had seen it many times from boats heading for the Outer Hebrides - now was a chance to land.

Imagine having a house like this and an island all to yourself….. 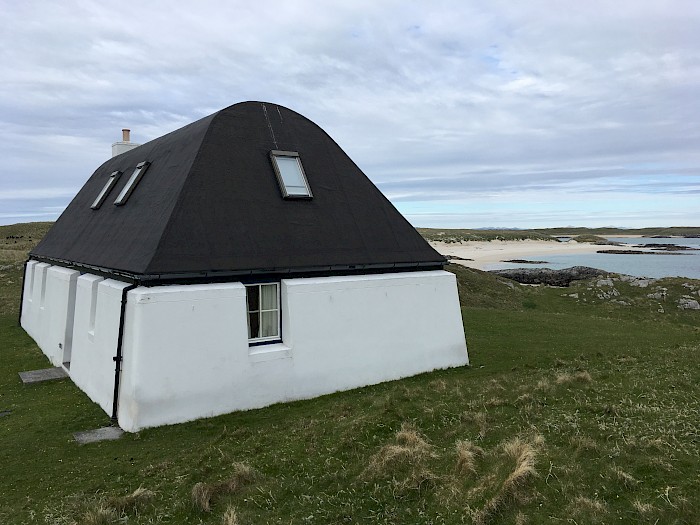 By contrast, Little Colonsay lies in the shadow of Ulva off the west coast of Mull. It’s a rough island of heather and rock but the only house sits in a carpet of bluebells. Clearly the house was well looked after - though apparently a previous owner was driven out by a plague of rats. The current owners have also planted patches of native trees, fenced off for protection from the deer which scattered, alarmed at our invasion. 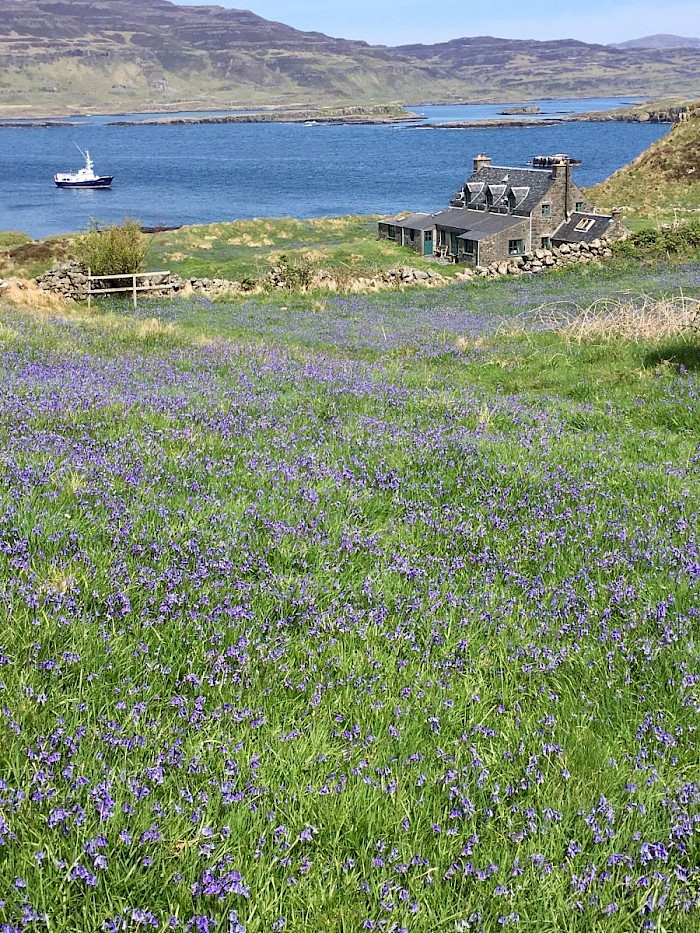 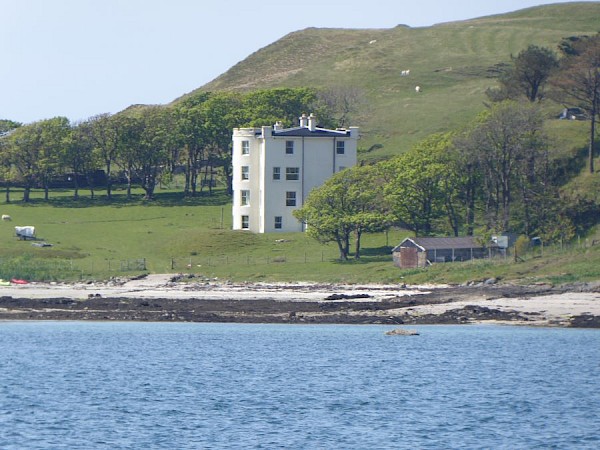 And then there is Inchkenneth - which has become known for its famous owners - the Mitford family. Daughter Unity was the one who, infatuated with Hitler, shot herself in the head in 1939 when war broke out. The Mitfords, when they were in residence on Inchkenneth, had their supplies sent from Harrods in London. Unity was taken ill here and died in Oban hospital in 1948. 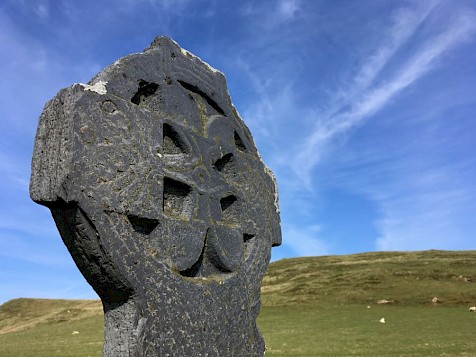 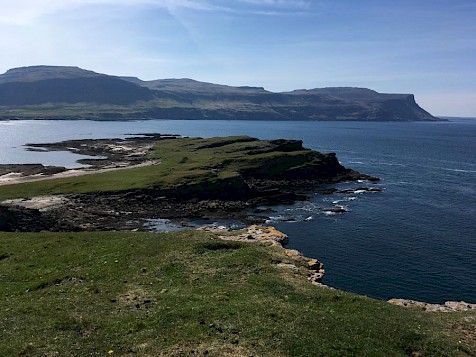 But there is so much more to Inchkenneth than a rather incongruous large house. It was a very holy place with a remarkable chapel and an excellent collection of ancient stones - good examples of West Highland medieval  carvings. Johnson and Boswell included it on their itinerary in 1773 when they toured the islands. Boswell is said to have been distressed by ghostly apparitions as he prayed at the 16th century cross one night. In bright sunlight there was no sign of any demons. Johnson and Boswell also visited Ulva. At that time it would have been a populous island - at its peak more than 600 people lived here in 16 villages. I had a spectacular walk on Ulva - visiting many sad ruined townships. The island was forcibly cleared in the 1840s. Now the population is around 12 but they have recently completed a community buyout and have plans to attract new residents. 350 expressions of interest have been received. Skipper Rob kindly picked some of us up at Ulva Ferry which meant we could do a good long walk on what is a substantial and fascinating island. 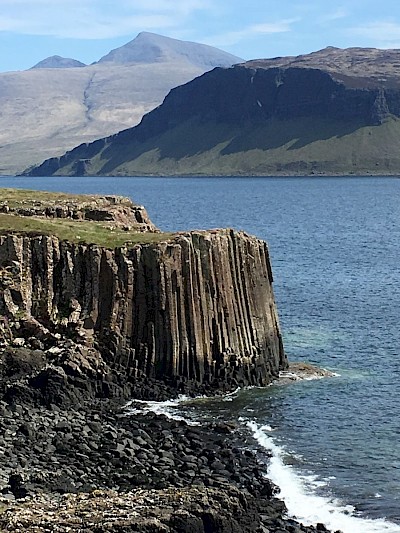 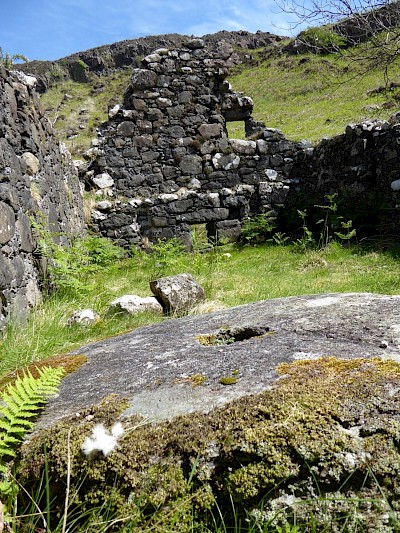 The rock formations on Ulva are similar to Staffa and the Giant’s Causeway. The ruined mill at Cragaig still has the original millstones.

We also had a day on Iona. Dodging the cruise ship tourists, I set off in search of the marble quarry and basically walked around the entire island. It never fails to charm. I had recently visited the Abbey - it now has an excellent audio guide and the stones are well presented in a new museum behind the Abbey. 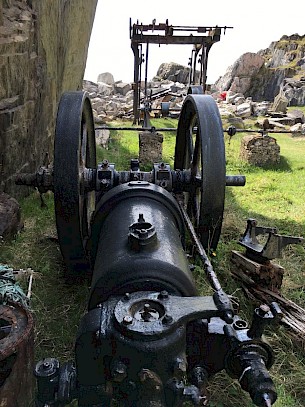 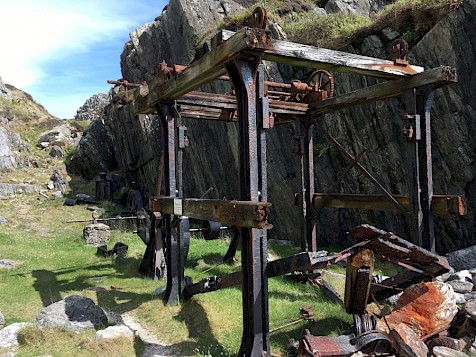 We had wildlife in abundance on this trip. An otter treated us to a wrestling match with a conger eel as we settled down to dinner. Dolphins escorted us from Bunessan to the Sound of Iona. 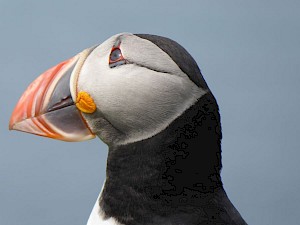 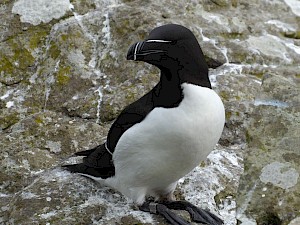 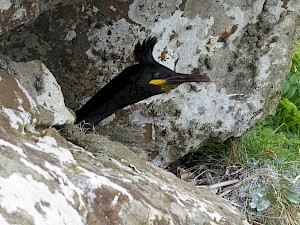 Sea eagles watched us warily from their nest on the shores of Loch Linnhe. A minke whale was spotted off Coll, and we seemed to be serenaded by cuckoos every evening. But the outstanding location for birdwatching is Lunga in the Treshnish isles. Careful planning meant we were there by 9.30 with a good hour and a half before the day trippers would arrive from Mull and Iona. Here you can sit and watch puffins, razorbills, shags and guillemots at close quarters. 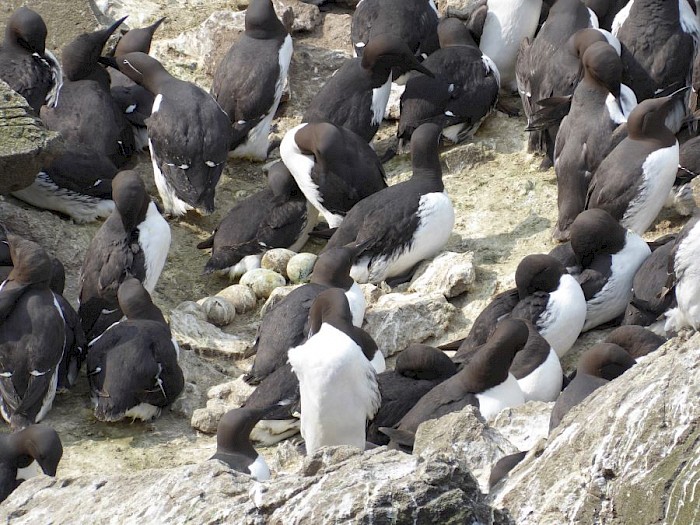 Are these eggs amongst the guillemots - or egg shaped rocks? 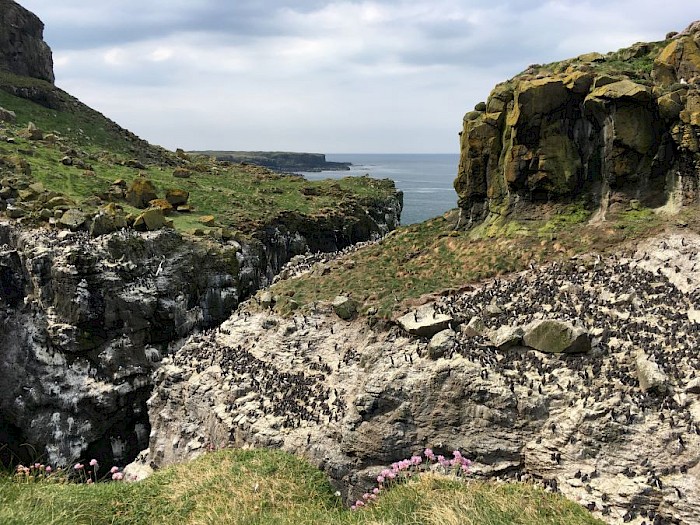 This was my 4th visit to Lunga - but my first time to descend into the “gloop” and find the tunnel that leads to the sea. Not for the fainthearted, but a nice little adventure - take a headtorch! The entrance to the 40 metre long cave is well hidden behind spectacular ferns - feels like a wonderful secret space. 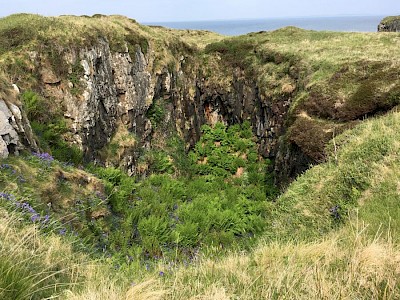 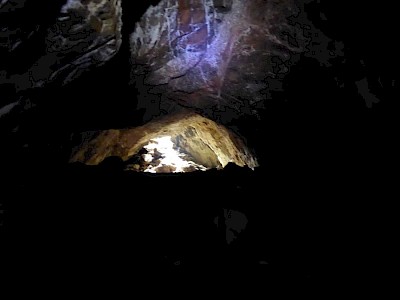 Our final island is one that is little visited. Rob had never landed anyone there before. Yet Carn na Burg Mor lies close to Lunga and has the substantial remains of a castle and chapel dating from at least the 15th century. The cliffs are intimidating but we found a grassy gully that gave relatively easy access to the summit plateau. The treasures of Iona are rumoured to have been buried on the island but if so, we failed to find them under the nettles and long grass. 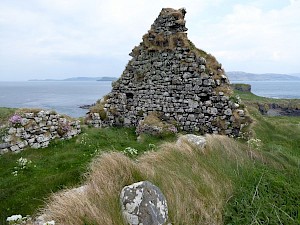 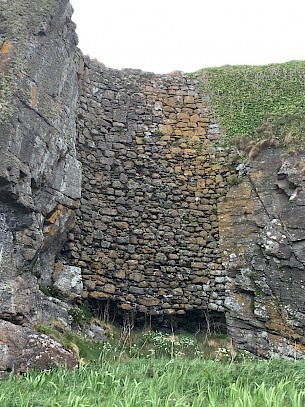 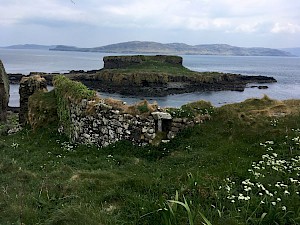 Defensive walling in the cliffs at Carn na Burg Mor and looking to Carn na Burg Beg which also has fortifications.

It only remained for us to spend a last night at Ardtornish on the Sound of Mull watching seals cavorting beside the boat. It had been an amazing week with not a drop of rain. 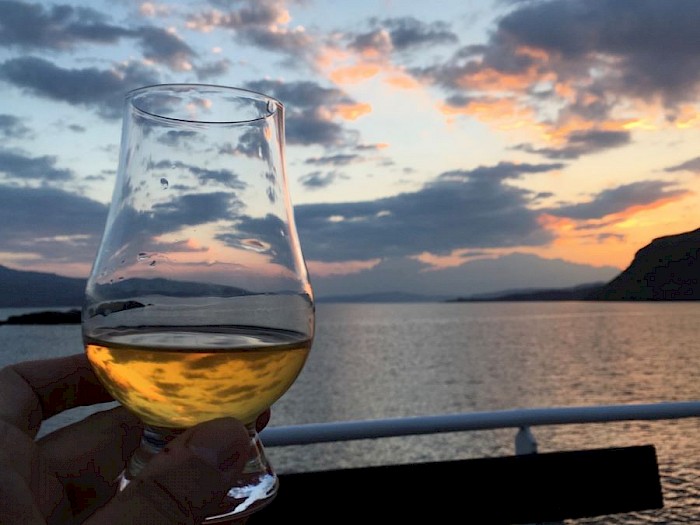 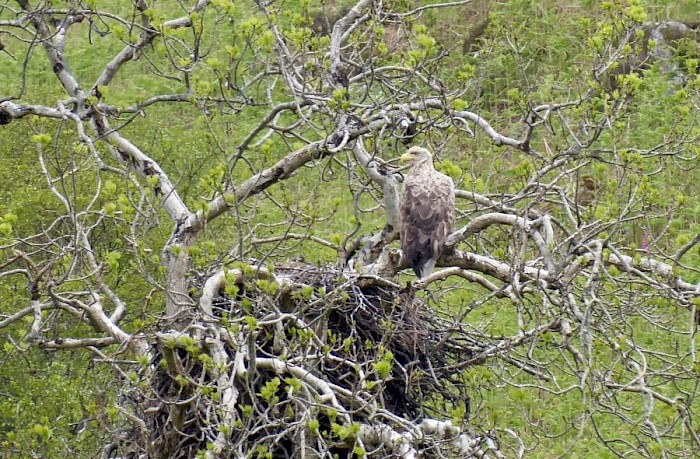 And some of my favourite flowers from the trip 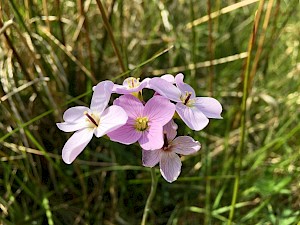 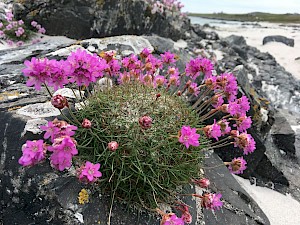 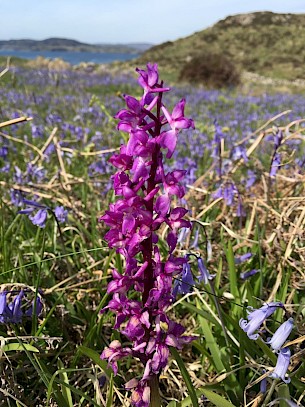 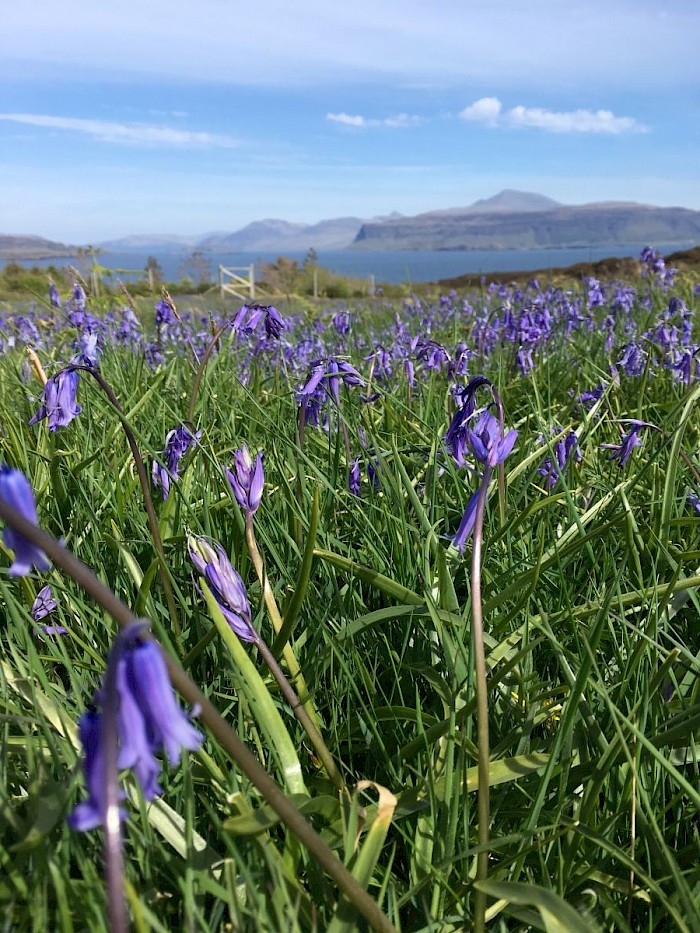 My thanks to my sailing companions and fellow adventurers, to skipper Rob, mate Craig and cook Mags who were all magnificent. And Emma on shore.

We found the staff and crew of Hebrides Cruises second to none! As was this amazing cruise, the highlight of our much anticipated first visit to Scotland from Australia. It was evident that along with their professional, friendly service - core business was to ensure each individual on board had the best experience possible. We can highly recommend Hebrides Cruises to anyone looking to either visit the islands of Scotland or simply enjoy the best that cruising has to offer.